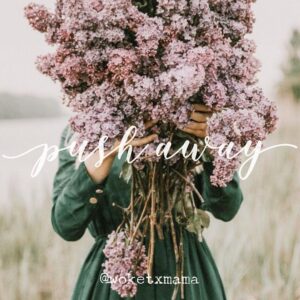 There is a time to push away from a conversation when it’s clear the seed planted will not take root.
⠀⠀⠀⠀⠀⠀⠀⠀⠀⠀⠀⠀
We lost close friends over this vax topic. Their unexpected response upon learning of our views was not loving. I am not confrontational, so my response left me in quiet tears as they fired accusations. They were not open to anything we had to say.

Why can’t people be mad at the lies and not the people shining a light on the deception? Cognitive dissonance is rough on the receiving end. Sigh…
⠀⠀⠀⠀⠀⠀⠀⠀⠀⠀⠀⠀
Afterwards, I wanted to call and defend myself, but I was reminded that it’s best to hush in the hurt. Scripture repeats “those who have ears to hear, listen...” Everyone is NOT ready.
⠀⠀⠀⠀⠀⠀⠀⠀⠀⠀⠀⠀
The Lord kept bringing me back… “For the whole law is fulfilled in one statement: Love your neighbor as yourself. But 𝙞𝙛 𝙮𝙤𝙪 𝙗𝙞𝙩𝙚 𝙖𝙣𝙙 𝙙𝙚𝙫𝙤𝙪𝙧 𝙤𝙣𝙚 𝙖𝙣𝙤𝙩𝙝𝙚𝙧, 𝙬𝙖𝙩𝙘𝙝 𝙤𝙪𝙩, 𝙤𝙧 𝙮𝙤𝙪 𝙬𝙞𝙡𝙡 𝙗𝙚 𝙘𝙤𝙣𝙨𝙪𝙢𝙚𝙙 𝙗𝙮 𝙤𝙣𝙚 𝙖𝙣𝙤𝙩𝙝𝙚𝙧. I say, then, walk by the Spirit and you will certainly not carry out the desire of the flesh. For the flesh desires what is against the Spirit, and the Spirit desires what is against the flesh; these are opposed to each other, so that you 𝙙𝙤𝙣’𝙩 𝙙𝙤 𝙬𝙝𝙖𝙩 𝙮𝙤𝙪 𝙬𝙖𝙣𝙩.” Galatians‬ ‭5:14-17‬
⠀⠀⠀⠀⠀⠀⠀⠀⠀⠀⠀⠀
HE is my defender. My job is to plant the seed… and let Him do the rest.
⠀⠀⠀⠀⠀⠀⠀⠀⠀⠀⠀⠀
Out of that experience, this account was born. Hearing our pro-life, Christian friends say, “I don’t care! They were going to be aborted anyway!” when my husband tried to let them know there were aborted fetal cells in vaccines [ they were NOT going to be aborted anyway]. This experience revealed just how deep the deception runs within the body of Christ. In some ways, that experience prepared me for the hate messages I now get online: baby killer, racist, white Bible thumper, uneducated…
⠀⠀⠀⠀⠀⠀⠀⠀⠀⠀⠀⠀
Content on this account, which contradicts a lifelong belief, can stir emotion before a word is ever exchanged. Before engaging with someone, I ask myself if I’m spiritually ready to respond. I don’t always get it right, but I’m learning to push away from toxic conversations. Plant the seed and let God do the rest… 𝙤𝙧 𝙗𝙚 𝙘𝙤𝙣𝙨𝙪𝙢𝙚𝙙 𝙗𝙮 𝙤𝙣𝙚 𝙖𝙣𝙤𝙩𝙝𝙚𝙧. 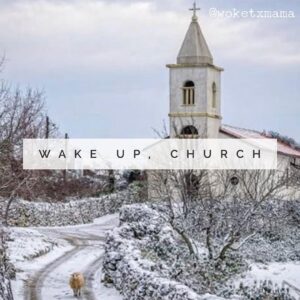 Like many, we watched a church service online, as most church buildings closed their doors, due to government restrictions… for a virus.
⠀⠀⠀ ⠀
I won’t get into how I feel about the church doors closing in this post, but I will tell you what made my heart sink as we listened [live] to one of our favorite ministers in this season. He began to explain the importance of precaution and expressed hope that they are working on medicine… and then he spoke the word I was hoping he would NOT mention in this context…… Vaccines. *Sigh*  My husband changed the channel. I’m not here to slander this minister, but to simply share this…
⠀⠀⠀ ⠀
Many years ago, when my husband and I pastored a church, we were not aware of the evils behind the vax industry — nor did we know ANYONE who questioned them. If they did, they remained SILENT. We didn’t understand the carcinogenic toxins, nor the abuse of aborted babies. If only someone had planted a seed.
⠀⠀⠀ ⠀
We can allow ourselves to look back with regret at all the things we wish we would have done differently, the brokenness lying in the past. Or… We can look forward to the hope set before us, while sharing the hope within us to those who are unaware.
⠀⠀⠀ ⠀
Sadly, everyone will not be ready to comprehend the deception they allowed themselves to embrace — to have their entire belief system shaken. Those who have ears, let them hear.
⠀⠀⠀ ⠀
However, for those who are awake, silence is not a luxury. Let us NOT remain voiceless while many people, Christ followers, LEADERS, are blinded to the point of NOT recognizing this growing darkness.
⠀⠀⠀ ⠀
I’m praying for the church to WAKE UP.
⠀⠀⠀ ⠀
If you would like a copy of the documents I have been mailing to churches, PLEASE send me an email at — learntheriskdotorg@outlook.com. 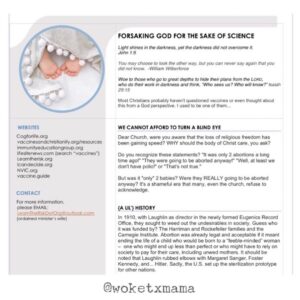 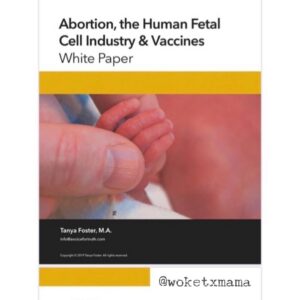 There is a time to be silent and a time to SPEAK (Ecclesiastes 3:7). 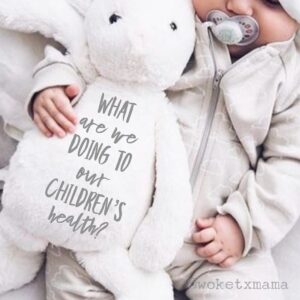 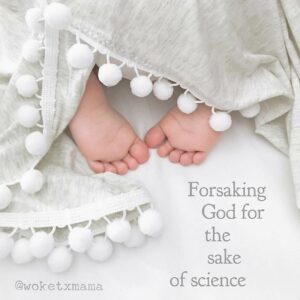 This is a tough one. I started this post in my notes weeks go. I’ll warn you. It’s heart-heavy. And I’m thankful many of you are finding your voice! Because we cannot afford to turn a blind eye.
⠀⠀⠀ ⠀
Do you recognize these statements? “It was only 2 abortions a long time ago!” “They were going to be aborted anyway!” “Well, at least we don’t have polio!” or “That’s not true.”
⠀⠀⠀ ⠀
But was it “only” 2 babies? Were they REALLY going to be aborted anyway? How I WISH all of this were NOT true! It’s a shameful era that many, even the church, refuse to acknowledge. 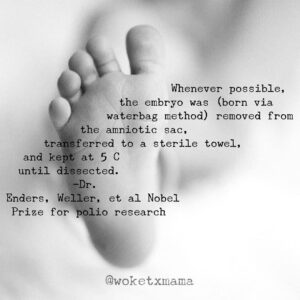 ⠀⠀⠀ ⠀
In 1910, with Laughlin as director in the newly formed Eugenics Record Office, they sought to weed out the undesirables in society. Guess who it was funded by?? The Harriman and Rockefeller families and the Carnegie Institute. SHOCKER, right? Abortion was already legal and acceptable if it meant ending the life of a child who would be born to a “feeble-minded” woman –  one who might end up less than perfect or who might have to rely on society to pay for their care, including unwed mothers. It should be noted that Laughlin rubbed elbows with Margaret Sanger, Foster Kennedy, and… Hitler. The U.S. set up the sterilization prototype for other nations. Awesome.
⠀⠀⠀ ⠀
As early as 1936, forced abortions were legal and performed under the U.S. “Model Eugenic Sterilization Law” of 1922 and used in polio research. Forced abortion and sterilization (ethnic cleansing) continued into the early 1970s. And… if it worked for polio, why not rubella, etc.? For more on the eugenics rabbit hole, start with: https://cogforlife.org/2012/06/13/polioperversion/
⠀⠀⠀ ⠀ 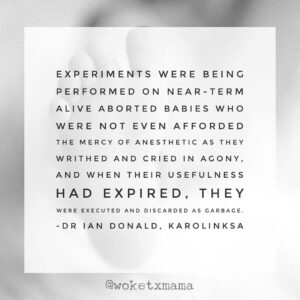 Human embryos of two and one-half to five months gestation were obtained from the gynecological department of the Toronto General Hospital…NO macerated specimens were used and in many of the embryos the heart was STILL BEATING at the time of receipt in the virus laboratory. -Drs. Thicke, Duncan, Rhodes
⠀⠀⠀ ⠀
My heart canNOT even fathom this kind of evil. Listed as ingredients, we’ve reduced these precious babies to mere letters and numbers, but God has already given them a name.

Did you know that you can buy human cells online? It’s big money. Forsaking God for the sake of science. I don’t believe God had this in mind as an exception to the rule, when He commanded us not to kill. The church doesn’t speak for me. I stand before God alone. 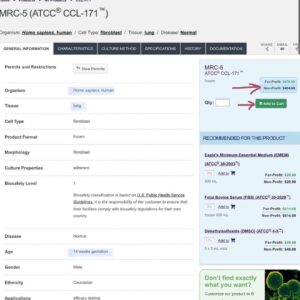