“Oh my God, I can’t believe we did what we did,” Thompson confessed to Hooker on tape. 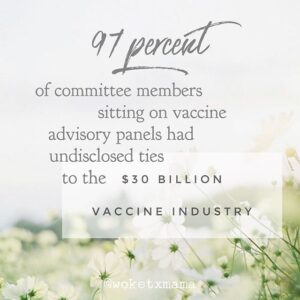 The telephone tapes, and Thompson’s copies of shredded data are the basis of the 2016 documentary film, Vaxxed: From Cover-Up to Catastrophe.
⠀⠀⠀ ⠀
Other evidence of widespread CDC corruption includes a 2009 Department of Health and Human Services report which found that 97 percent of committee members sitting on vaccine advisory panels had undisclosed ties to the $30 billion vaccine industry (1.23.17).
⠀⠀⠀ ⠀
The fact that the CDC itself owns 56 vaccine patents (as of 1.17.17) suggests an enormous conflict of interest within the agency which buys and sells more than $4 billion in vaccine stock every year.

woketxmama
⠀⠀⠀ ⠀
Source (with link to the HHS report): ⠀⠀⠀ ⠀
http://www.ghostshipmedia.com/2017/01/23/swedish-public-health-authority-hid-vaccine-link-childhood-diabetes/ ⠀⠀⠀ ⠀
(childhood-diabetes-vaccine link is something to look into as well.)