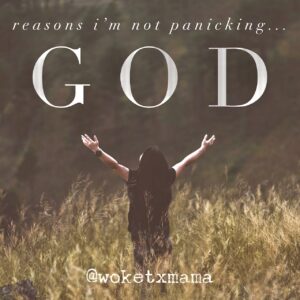 I love this community! But I realized I had to set boundaries for myself [by turning off Instagram replies in stories] when my inbox became FLOODED with fear. From Christians.

I get it. These headlines are not easy to navigate. But, as Christ-followers, our response should look different —> Even if we have to shake ourselves as the psalmist did when he told. his. soul. to hope in God. (Psalm 43:5)

We have a HOPE that’s bigger than… (insert any headline here — today, it’s drama on our nation’s capitol). No matter the circumstance, the message remains the same.

Salvation is found in Christ.
Stay away from vacksheens.
Stop listening to the lies of the enemy.

Satan’s days are numbered. And he ain’t happy about it.
But we can certainly rejoice! The joy of the Lord is our strength. Amen!

p.s. I’m not a huge fan of the author of the song, but that doesn’t change the truth in the message. Also… You CAN still message me! 😉 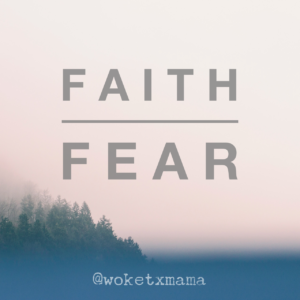 I share this for no other reason than to confirm, once again, that this has been planned – in the works for years. Compare this text from The Conflict of the Ages (uncensored) to current events.

“In our day the power of gold has replaced liberal rulers. There was a time when faith ruled. The idea of freedom cannot be realized because no one knows how to make reasonable use of it. Give the people self-government for a short time and it will become corrupted. From that very moment strife begins and soon develops into social struggles, as a result of which states are aflame and their authority is reduced to ashes. The people of the Gentiles are stupefied by spirituous liquors; their youth is driven insane through excessive studies of the classics, and vice to which they have been instigated by our agents-tutors, valets, governesses—in rich houses, by clerks and so forth, and by our women in the pleasure places of the Gentiles. Among the latter I include the so-called “society women,” their volunteer followers in vice and luxury. Our motto is power and hypocrisy.

Violence must be the principle; hypocrisy and cunning the rule of those governments which do not wish to lay down their crowns at the feet of the agents of some new power. The evil is the sole means of attaining the goal of good. For this reason we must not hesitate at bribery, fraud and treason when these can help us to reach our end. In politics it is necessary to seize the property of others without hesitation if in so doing we attain submission and power.

By the severity of our doctrines, we shall triumph and shall enslave all governments under our super-government. Even in olden times we shouted among the people “Liberty, Equality, Fraternity.” These words have been repeated so many times since by unconscious parrots, which, flocking from all sides to the bait, have ruined the prosperity of the world and true individual freedom, formerly so well protected from the pressure of the mob.

In all parts of the world the words “Liberty, Equality, Fraternity” have brought whole legions into our ranks through our blind agents, carrying our banners with delight. Meanwhile these words were worms which ruined the prosperity of the Gentiles, everywhere destroying peace, quiet, and solidarity, undermining all foundations of their states . . . Abstract liberty offered the opportunity for convincing the masses that government is nothing but the manager representing the owner of the country, namely the people, and that this manager can be discarded like a pair of worn out gloves. Do not think that our assertions are without foundation: note the successes of Darwinism, Marxism and Nietzscheism engineered by us. The demoralizing effects of these doctrines upon the minds of the Gentiles should already be obvious to us.

We have opened the arenas in different states, where revolts are now occurring, and disorders and bankruptcy will shortly appear everywhere. We will present ourselves in the guise of saviours of the workers from oppression when we suggest that they enter our army of Socialists, Anarchists, Communists, to whom we always extend our hand under the guise of the rule of the brotherhood demanded by the human solidarity of our social masonry. This hatred will be still more accentuated by the economic crisis which will stop financial transactions and all industrial life.

Having organized a general economic crisis by all possible underhand means and with the help of gold which is all in our hands, we will throw great crowds of workmen on the street, simultaneously, in all countries of Europe. These crowds will gladly shed the blood of those of whom they, in the simplicity of their ignorance, have been jealous since childhood and whose property they will then be able to loot.  *One of Weishaupt’s principles was “The end justifies the means.” It is echoed in Marxism.

They will not harm our people (Jews) because we will know of the time of attack and we will take measures to protect them. Remember the French Revolution, which we have called “great,” the secrets of its preparation are well known to us, for it was the work of our hands. Since then we have carried the masses from one disappointment to another, so that they will renounce even us in favor of a despot sovereign of Zionist blood, whom we are preparing for the world.

To control public opinion it is necessary to perplex it by the expressions of numerous contradictory opinions until the Gentiles get lost in the labyrinth, and come to understand that it is best to have no opinions of political questions. The aristocracy of the Gentiles as a political force is dead. We do not need to take it into consideration. But as landowners they are harmful to us because they can be independent in their resources of life. For this reason we must deprive them of their land at any cost.

Let us raise wages, which, however, will be of no benefit to the workers, for we will simultaneously cause the rise in prices of objects of first necessity under the pretext that this is due to the decadence of agriculture, and of the cattle industry.  We have misled, corrupted, fooled, and demoralized the youth of the Gentiles by education along principles and theories known by us to be false but which we ourselves have inspired.

In countries so-called advanced we have created insane, dirty and disgusting literature. Today freedom of religion has been proclaimed everywhere, consequently, it is only a question of a few years before the complete collapse of Christendom. We must extract the very conception of God out of the minds of the Christians… We must destroy all professions of faith. We have taken great care to discredit the clergy of the Gentiles in the eyes of the people, and thus have succeeded in injuring their mission, which could have been very much in our way. The influence of the clergy is diminishing daily. Today freedom of religion prevails everywhere, but the time is only a few years off when Christianity will fall to pieces.

We will destroy the family life of the Gentiles… We will also distract them by various kinds of amusements, games, pastimes, passions, and public houses.

You know that the gold currency was detrimental to the governments that accepted it, for it could not satisfy the requirements for money since we took as much gold as possible out of circulation.”

Many ask… “How will it end? The end will be the complete defeat of His (God’s) enemies. His manifestation will silence every mouth and will for ever prove that Peter was right, and the true Church was right, in believing and confessing, “Thou art the Christ, the Son of the living God!” Such systems as Christian Science, Modernism, Unitarianism, and all the Christ rejecting systems and cults will suddenly terminate….”

The best summary to the ending is found in the book of Revelation. God wins! Therefore, His children win! And what a GLORIOUS day that will be!

Peace I leave with you; my peace I give you. I do not give to you as the world gives. Do not let your hearts be troubled and do not be afraid. – John 14:27

Do not worry about tomorrow, for tomorrow will worry about itself. Each day has enough trouble of its own. – Matthew 6:34

For I am convinced that neither death nor life, neither angels nor demons neither the present nor the future, nor any powers, neither height nor depth, nor anything else in all creation, will be able to separate us from the love of God that is in Christ Jesus our Lord. – Romans 8:38-39

If you don’t know Him, now would be a great time to make Him your Savior… He is waiting with immeasurable love for you. John 3:16

But God… The cross has the final word.

I have never been so homesick for a place I’ve never been. Jesus is the only answer.
⠀⠀⠀ ⠀
Then I heard a loud voice from the throne: Look, God’s dwelling is with humanity, and He will live with them. They will be His peoples, and God himself will be with them and will be their God. He will wipe away every tear from their eyes. Death will be no more; grief, crying, and pain will be no more, because the previous things have passed away. Then the one seated on the throne said, “Look, I am making everything new.” He also said, “Write, because these words are faithful and true.” Revelation‬ ‭21:3-5‬
⠀⠀⠀ ⠀
Come, Jesus, Come. Until you do, we occupy… pointing others to you.
⠀⠀⠀ ⠀
Video: Stephen McWhirter 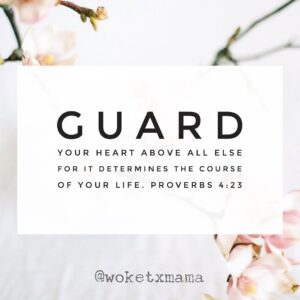 Anyone know what the man behind the curtain has up his sleeve next? Who feels like we’re living in The Truman Show? Hunger Games? Groundhog Day? 1984?
⠀⠀⠀ ⠀
There are several topics swirling in my mind to post, information competing for first place. It can be dizzying some days. And I will need a little break soon. But this keeps coming to the forefront…
⠀⠀⠀ ⠀
The object of waging a war is always to be in a better position in which to wage another war.
– George Orwell, 1984
⠀⠀⠀ ⠀
Thankfully, I know the ONE who holds yesterday, today, and forEVER. It may look grim. But God… Temporary suffering can NOT compare to the coming eternal glory God has planned.
⠀⠀⠀ ⠀
He restores
He establishes
He strengthens
He supports
1 Peter 5:10
⠀⠀⠀ ⠀
My friends… “Put on the full armor of God, so that you can take your stand against the devil’s schemes. For our struggle is not against flesh and blood, but against the rulers, against the authorities, against the powers of this dark world and against the spiritual forces of evil in the heavenly realms. Therefore put on the FULL armor of God, so that when the day of evil comes, you may be able to stand your ground, and after you have done everything, to stand.  Stand FIRM then, with the belt of TRUTH buckled around your waist, with the breastplate of RIGHTEOUSNESS in place, and with your feet fitted with the readiness that comes from the gospel of PEACE. In addition to all this, take up the shield of FAITH, with which you can extinguish ALL the flaming arrows of the evil one. Take the helmet of SALVATION and the sword of the Spirit, which is the word of God.” Eph. 6:11-17
⠀⠀⠀ ⠀
This world is not my home. I’m just passing through…

woketxmama
⠀⠀⠀ ⠀
recommended songs:
Through It All
Such An Awesome God
You Keep On Getting Better
My Heart Your Home