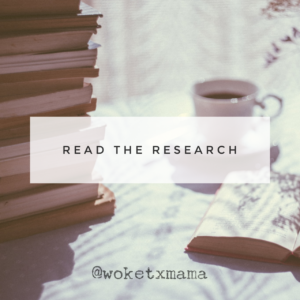 Read the research. It’s all we ask.

Tone and intent certainly don’t come across in text, but if you talk to me, you understand I share this sort of information out of love, attempting to save anyone heartache of injury. Not rare, just rarely reported (drs are not taught how to report them and parents of injured children are often gaslighted). Now that injuries are making headlines (ex. Bell’s Palsy), they are attempting to normalize them. Not cool. 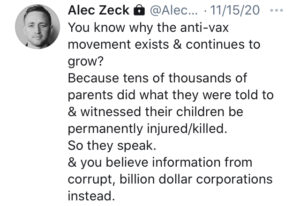 “We vaccinate and we’re fine.”

Read 13.1 on every vax insert and also ask where the sudden rise in autoimmune issues, etc. could possibly stem from… especially after the act of 1986, relieving pharma from liability and the subsequent  rise in vaxs??

If nothing else, take the time to read ingredients and ask if it would be okay to ingest —> much less inject <— this toxic brew, bypassing our God-given immune systems? 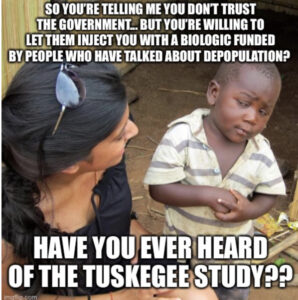 “But at least we don’t have Polio!”

“But Dr. Humphries is an anti-vax quack.”

Yeah… Google is not our friend.  😉  That’s what they want us to think. She changed her perspective on vaccines after listening to her patients, seeing the damage first-hand. THEN she researched the information they DON’T teach in med school. There is nothing in it for drs who speak out. If anything, their careers are on the line. Those are the voices we should be listening to…

“But we should trust the scientists.”

Have you ever heard of whistleblower Dr. William Thompson? Rep. Bill Posey has tried, but Congress still refuses to subpoena  Thompson. The Vaxxed documentaries give a quick little history on his eyewitness account of the CDC destroying data (which showed black boys getting autism at extremely high rates). Scientists destroyed data that could save MANY people from injury!

How I wish I were wrong about all of this… Research, don’t regret. I have plenty on my “resources” page to get you started! Blessings! 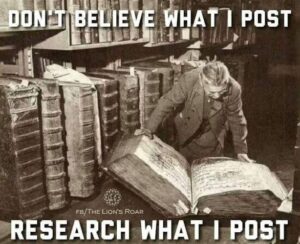 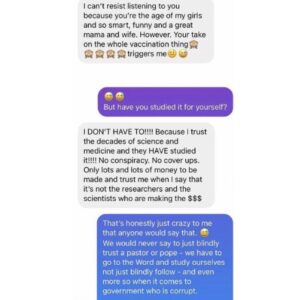 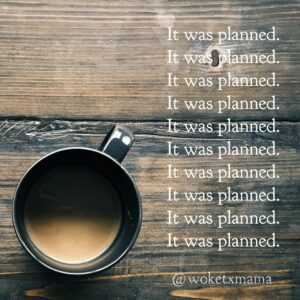 Pull up a chair. Let’s chat. It’ll be quick, I promise.

Maybe you’re like me and you need to hear something spoken, which goes against your belief system, a time or twenty… or maybe 50. I’m right. there. with. you. I’ve been pretty transparent about my Bush family heartbreak. If you believe he had nothing to do with 9/11, keep digging… and listening to those attempting to warn you of a bigger agenda.

“According To The Rockefeller Foundation A Global Pandemic Must Result In Increased Control, Where People Gladly Surrender Their Freedom, In Order To Feel Safe Again.”

Do you feel safer now? Barricaded playgrounds. Closed or compliant churches. Face coverings, limiting oxygen and making it easier for criminals. Temperature checks, getting the masses comfortable with forehead scans. Sound familiar? Need I go on? Are these 14 days to flatten the curve over yet?

If this PLANdemic has been hard to comprehend, let me help with the need to hear it again..

Thousands of medical doctors call the pandemic a global crime, and a world dictatorship with a sanitary excuse.

Two years before Covid-19 came to the global scene, the European Union, the USA, China and other nations suddenly started exporting tens of millions of test kits for Covid-19.

In 2013 a musician predicts a global pandemic with a coronavirus and says this will happen in 2020. He knew this because of personal investigation of so called ‘conspiracy theories’.

In 2017 Anthony Fauci guaranteed a surprise outbreak of an infectious disease during the first term of the Trump administration.

Right before the outbreak the Global Preparedness Monitoring Board told the world to be ready for a coronavirus pandemic.

In 2018 the Institute for Disease Modeling announced a global pandemic with a flu virus, originating in China in the area of Wuhan.

In 2018 Bill and Melinda Gates announced that in the coming years there would be a global pandemic of an engineered virus.

The coronavirus SARS-CoV-2 was created in the Bio Safety Lab Level 4 in Wuhan, which received millions of dollars from Anthony Fauci.

Several movies depicted the coronavirus pandemic with great detail, and even mention hydroxychloroquine as the cure.

The Summer Olympics in 2012 played a pandemic of a coronavirus during their opening show.

The investigative journalist Harry Vox predicted in 2014 that a global pandemic would be caused, so the ‘ruling class’ could implement a higher level of authoritarian control.

The investigative journalist Anthony Patch predicted a global pandemic with a man made virus, that would be used to force a DNA altering vaccine on humanity.

Dr. Carrie Madej studied DNA and vaccines for decades and says the plan is to use the Covid-19 vaccine to start the process of transhumanism: reprogramming the human DNA.

The CIA officer Dr. John Coleman studied secret societies and says their goal is to depopulate the earth by means of organized pandemics of fatal rapid acting diseases.

In the state of Georgia a huge monument was erected in 1980 with ten guidelines for humanity, in eight languages. The first of these ‘Ten Commandments’ is that humanity needs to be reduced to half a billion people.

Bill Gates said during a TED talk that new vaccines can be used to reduce the world’s population with 10-15%.

The ‘health ranger’ Mike Adams predicted years ago what we see happening now: the release of an engineered bioweapon, followed by a vaccine mandate, massive government funding for the vaccine industry and a vaccine that is being developed in record time. He also predicted that this vaccine will kill innumerable people over the course of a couple of years.

In 2010 the Rockefeller Foundation published the ‘Scenario for the future…’ in which they describe a coming global pandemic, that should result in the implementation of authoritarian control over the people, which will then intensify after the pandemic.

In 2020 they publish a handbook on how to create this world of control, with a step by step guide. They say life cannot return back to normal, until the world has become ‘Locked Down’ with this top down control from authoritarian governments.

We indeed see that Bill Gates and many others worldwide are right away seizing control in unprecedented ways, with enforcing vaccine ID’s, microchips that will be implanted into people, mandating the wearing of face masks, social distancing, forced lock-downs, extreme contact tracing, and so on.

Part of this top down control is extreme censoring of every single voice from doctors, scientists or other experts that criticize what is going on.

Wake up, dear friends. And put your hope in THE truth.

For MORE, this is a must-read — proof that the pandemic was planned. 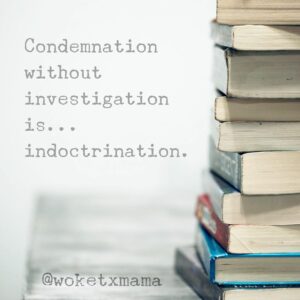 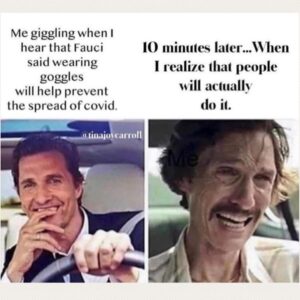 To them, I say… Laugh. I’m not deterred. I faith-walk the path set before me, as He lights the way (Psalm 119: 105). 𝐁𝐮𝐭 𝐰𝐡𝐞𝐧 𝐲𝐨𝐮’𝐫𝐞 𝐝𝐨𝐧𝐞 𝐥𝐚𝐮𝐠𝐡𝐢𝐧𝐠, 𝐈’𝐥𝐥 𝐛𝐞 𝐭𝐡𝐚𝐧𝐤𝐟𝐮𝐥 𝐭𝐨 𝐡𝐚𝐯𝐞 𝐲𝐨𝐮𝐫 𝐯𝐨𝐢𝐜𝐞 𝐢𝐧 𝐭𝐡𝐞 𝐟𝐢𝐠𝐡𝐭.
⠀⠀⠀ ⠀
If you’re blazing a similar path, I’m here to tell you that you’re not alone. With God, we’ve got this. 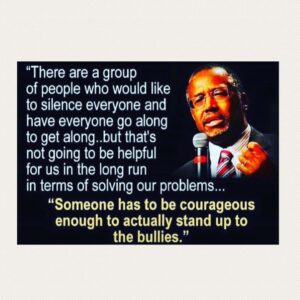 Now… for those of you who chose to homestead early on, I give you FULL permission to laugh at me while I figure this out next year. ha! Prayers appreciated… 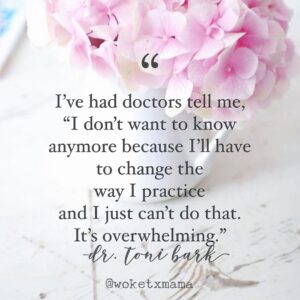 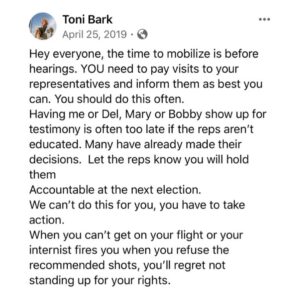 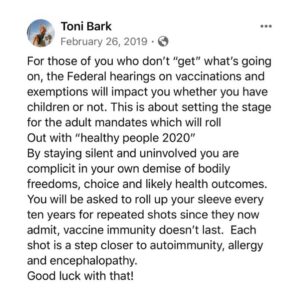 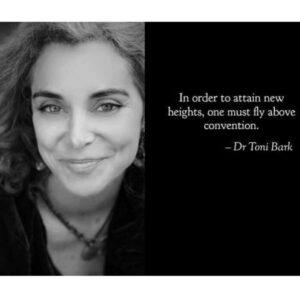 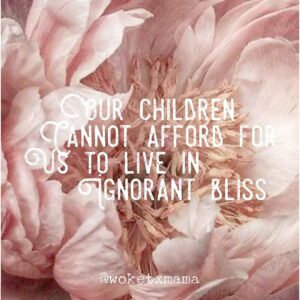 A friend once asked, “Don’t you just want to trust [a professional] sometimes?” She lives in deep trust of allopathic medicine. One of her babies ran a fever at 3 days old and the doctor told her the baby would be fine, no explanation. When I questioned giving a newborn Hep B at birth, she defended the vax by saying it’s possible they want to protect everyone, because you never know [who might get overlooked]. Cognitive dissonance is complicated.
⠀⠀⠀ ⠀
Pfizer, one of the largest pharmaceutical companies, grew by purchasing a handful of its competitors and through aggressive marketing [a practice it pioneered back in the 1950s by purchasing unprecedented advertising spreads in medical journals].
⠀⠀⠀ ⠀
The public should have ZERO trust in such regulatory agencies – they make recommendations because they are easy and convenient [for their pockets], NOT because children need them.
⠀⠀⠀ ⠀
The companies making childhood vaccines are also pHARMaceutical companies that have been punished, both criminally and civilly, in FEDERAL court for wrongdoing, unethical behavior, falsely misleading claims, injuring and endangering the public, and hiding product safety. This is not just unique to Pfizer. This is happening across the board. -Melissa
⠀⠀⠀ ⠀
If this was a medication and the FDA came across new research that showed a medication was 4% effective they would probably take it off the market. -Dr. Sears
⠀⠀⠀ ⠀
We should be looking at where the vaccines are coming from and the integrity of the company, especially when faced with mandates and laws?
⠀⠀⠀ ⠀
While I would love to blindly trust, our children cannot afford for us to live in ignorant bliss. And I have [several] reasons to question…