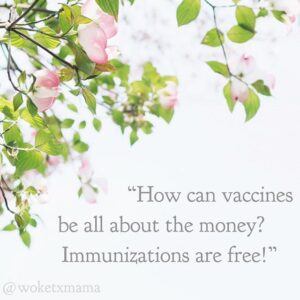 I recently talked with two physicians in different states that told me the HMO plans that they contract with do chart reviews and patient surveys at the end of each year. If their office scores high enough on these reviews, the HMO plan gives them a several thousand dollar bonus. This bonus varies depending on the number of patients the doctor sees. One of the requirements for a patient’s chart to pass the test is that they are fully vaccinated… ⠀⠀⠀ ⠀ ⠀⠀⠀ ⠀
⠀⠀⠀ ⠀
So, why not give their doctors a bonus for meeting this goal? Here’s why. This policy gives any doctor who contracts with such HMO plans an incentive to NOT want any unvaccinated families in their practice. Maybe a few such families wouldn’t make them fail the chart reviews, but if they have too many, there goes their year-end bonus.
⠀⠀⠀ ⠀
I’ve always wondered why so many doctors are so adamantly hardcore about demanding all their patients fully vaccinate, and why they kick patients out of their office who refuse. I’d always just assumed it was because the doctors felt that the vaccine protection was so important that they don’t want any children to be at risk, so they draw a line in the sand for the good of the child (in their minds).⠀ ⠀⠀⠀ ⠀ ⠀

BUT some doctors, especially those large groups who rely heavily on large HMO contracts, may actually be doing this because of money. Do they have the right to do so? Of course. But is it right? I don’t know. The American Academy of Pediatrics Committee on Bioethics makes it very clear that the official AAP policy is that doctors NOT kick patients out of their office over this issue. But when money talks, some people don’t listen…  -Bob Sears