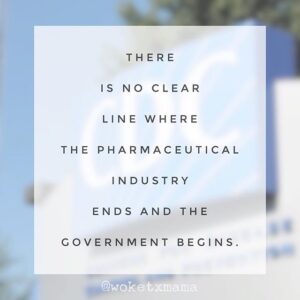 There is no clear line where the pharmaceutical industry ends and the government begins.
⠀⠀⠀ ⠀
Pharma has a direct influence on policy, both in Congress and in agencies like the CDC and FDA.
⠀⠀⠀ ⠀
The drug industry at one time was called the patent medicine industry. This is still the more revealing name. <<-Hunter Lewis, Crony Capitalism in America
⠀⠀⠀ ⠀
Pharma companies aren’t fond of natural remedies for ailments because they can’t be patented. So they dedicate themselves to inventing products for which they can profit, thanks to government intervention in the market.
⠀⠀⠀ ⠀
In 2005, the National Institutes of Health sold vaccine technology to Merck and GSK under a co-exclusive license. Basically, Merck and GSK were guaranteed that the government would use force to protect their duopoly over the use of this technology for the purpose of profiting from sales of vaccines with the government collecting royalties. Merck then used this technology in its Gardasil vaccine, with the FDA’s backing. Marketing was designed to promote fear rather than provide evidence-based science.
⠀⠀⠀ ⠀
This statement has not been evaluated by the FDA. This product is not intended to diagnose, treat, cure, or prevent any disease. <<-is a useless disclaimer. With no clinical trials actually determining that the vaccine can reduce the risk of cervical cancer, the FDA lets Merck market it as a cancer-prevention vaccine anyway.
⠀⠀⠀ ⠀
Remember the CDC director, Dr. Julie Gerberding (2002-2009), who left her government job to become president of Merck’s vaccine division – a $5 billion global business? ⠀⠀⠀ ⠀ ⠀⠀⠀ ⠀

Show us proof of concern for health over profit, then maybe the tide will change. Maybe.